My daughter recently told me about an incident that happened at school.  She was staring off in to space at something on a classroom wall.  There happened to be a boy in that general direction and thought she was staring at him.  Then teenage drama ensued from that assumption.

I am very blessed with two girl children and two boy children.  And I can tell you that there does seem to be something more gender specific (at least in this house) in regards to being stared at.  I’ve had talks with the girls and a few with the boys.  And today I was thinking about it.  I will never forget my own eye-opening thoughts on staring (get the pun there?).  I was a teenager, out to eat with my parents.  I went somewhere and came back to the table all upset because a man was staring at me as I walked by.  The very realistic answer from my dad has stuck with me.  People are going to look at you, you can’t stop that.  So don’t get upset!

Now I know there are all those cute little sayings about not changing your child for a harsh world; but you should change a harsh world to be better for your child.  Well, last I checked no one was going to let me walk around with a baseball bat, hitting people who stare at my children.  So, I hope to educate them about the world we live in.  For generalizations purposes, I have broken staring in to three categories.

There are harmless stares.  Just as my daughter was staring off in to space, boys do this too.  You may think someone is staring at you.  And maybe they are looking in your direction.  But, they may be inwardly contemplating why a circle pizza comes in a square box.  I have told all my children to apologize when they catch themselves doing this because it can weird people out.  But when they themselves appear to be in the direction of a blank stare, engage in some understanding.  If they aren’t sure, make a face at the person.  If they react, they are looking at you.  If they don’t notice, they have clocked out mentally.  No harm there.

Next we have the actual stare of interest.  Whatever the interest, the person is staring.  We all know staring is rude.  Some people go as far as to proclaim that the stare they give someone else is flattering.  Well, it isn’t.  A complement is flattering.  A stare is creepy.  At this stage, there are several options.  If the person doesn’t realize that you see them, I personally prefer to bring it to their attention in a big way . . that seems to deter further staring.  I was once measuring the exterior of a house and a guy on a bulldozer on the next lot was staring.  I waited a minute, and he was still staring.  So I very dramatically pointed my camera at him and pretended to take a picture.  He looked away rather quickly.  In closer proximity, usually an annoyed look can make someone rethink their attention.  And I’ve told the children, if they are the one giving the interested stare, again apologize, it most likely weirded the other person out!

Lastly is the malicious stare.  This is the one that I want all my children to understand.  Honestly, it is probably going to be easier for the girls.  The boys just don’t seem to think with that degree of perception when it comes to others looking at them.  The malicious stare needs to end as soon as possible.  If the person giving the malicious stare gets their “moment”, it will not have a pleasant outcome.  For this one, leave the situation, get a friend or a stranger, or do something to divert the attention.  This grosses out my teenager, but I once picked my nose on purpose while looking at a malicious starer . . he looked away and stopped following me.  Unfortunately this technique will not work in all malicious stare situations.  *And yes I used hand sanitizer when I got back to my car!

Tonight I am thankful for more time to talk to my kids.  I don’t want them walking around life uncomfortable.  The realistic truth is that people will stare.  And it can be uncomfortable.  But, with a little understanding and mental preparation; I hope it will never be a debilitating event in life. 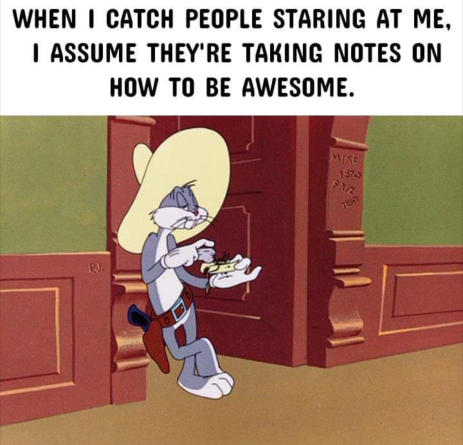