We were running a little late on daylight when we set out on our bike ride tonight.  We could have stayed home.  But the clock is ticking!  The race will be here in two weeks!  And we aren’t ready!

So we set off in to the evening air.  We were just going to go a little ways.  But then, I thought we should we at least go 10 miles.  I had on a neon orange shirt and there are lights on my bike.  Surely we would be fine!

About 6 miles in my daughter made a weird noise and I looked back to see her swerving  strangely.  She said she was stung by a bee on her face.  I thought maybe a bee hit her.  But surely it didn’t sting her for real while she was biking . . right?  I told her that we would call dad to come and get her if she started to swell.

Yep, it stung her.  First there was a little red dot.  Then a white circle around it.  It was very close to her eye.  With the white circle, we called dad.  We kept biking towards home as he got the van to come and get her.  We made it another mile before he found us.  Then we saw some flashes in the sky; we were watching lightening to the north.  With the lightening, I told the kids that we were going to all go in the van and go home.

It takes time to try and fit three bikes in the van.  And I’m not entirely sure it can be done with four people.  By the time the hubster got to us, my daughter’s eye was swelling fast and red all the way around it.  Hubster asked if we wanted to try and all fit in the van; which had been my plan.  But, her eye was concerning me.  I sent them on their way quickly to go treat her face.

That left my son and I speed biking in the increasingly dark sky with lightning to the north.  Did I mention we had pasta for dinner?  It was delicious.  I like pasta . . a lot.  I ate a little too much.  And we were racing home as fast as we could go.  Ugh.  We made it!  Then I had to lay in bed for a little bit!

I am however, a mom who did an activity with two kids.  Once I didn’t feel like I was going to lose my dinner, I got up to find my two other anxious kids and went to jump on the trampoline.  I had recently purchased some lights to put up outside.  That bought me a little more time to let my tummy settle!  The lights were pretty.  And the trampoline is always fun!

Tonight I am thankful that all’s well that ends well!  Daughter’s eye is swollen, but calming.  Son and I made it home (he is quite impressed with himself speeding home next to his sweaty, gasping for air mother).  Other daughter and son had fun on the trampoline under the lights.  Hubster is snoozing in his chair.  I’m going to bed! 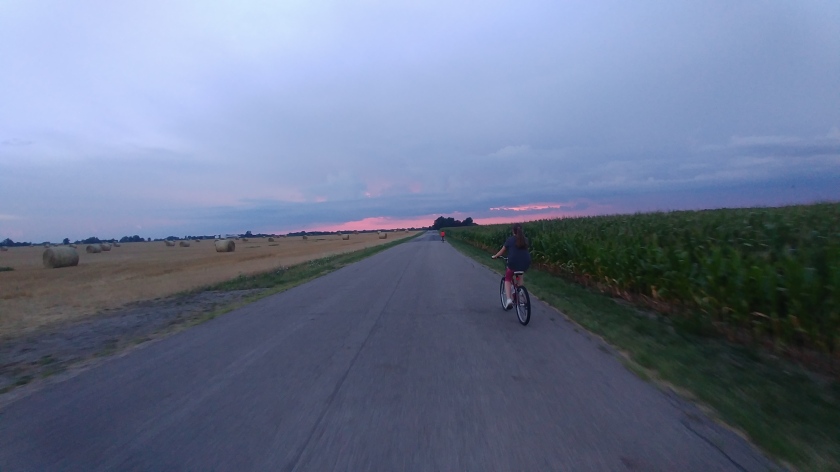