I was very thankful to not have to drive too much today.  The roads were slippery in patches, and that blowing snow over the ice was deceiving!  The traffic texts to my phone got pretty regular there for a bit.

There was a big accident on the highway.  I drove by it going north on the highway; the accident was on the south side.  The traffic was backed up for quite a while.  While I was out, I got a text that the highway was closed.  I said a prayer for those involved.

And when it was time for me to drive back, I went thru town.  Which meant . . . I threw carbohydrate-caution to the wind and stopped at Mr. Taco!!  Oh YUM!  I have to say, it is a very good thing that I don’t live closer to this restaurant of deliciousness!!

Tonight I am thankful that I got to have un-planned Mr Taco today!!  I am so glad they opened back up!!  There were a lot of years with no Mr Taco in this world . . and that was a lot of years too many! 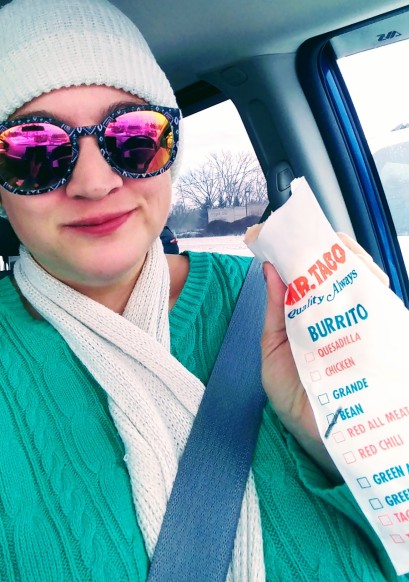