My daughter told me that she does not want to go to school tomorrow.  She said she hates going to school on 9/11.

In middle and high school, there are multiple classes.  And my daughter said last year every class took a moment to talk about 9/11 and have a moment of silence.  She said it was very depressing and made people cry all day.

That made me think, 9/11 was eighteen years ago.  And although it still seems like yesterday to me; no one in her class was born yet.  It is history to them, recent history; but it is something in their history books.  They know people died.  They know there were terror events.  But they did not live thru it.

I’ve seen the Facebook posts coming out.  Some of them are respectfully remembering.  Some also seem to be aiming guilt at people that they assume have forgotten.  Some are pointing out numbers of lives lost.  I’ve seen a few that talk about the people themselves that were lost.

What do we want the younger generation to think?  How are we influencing them?

I told my daughter to change the lesson.  The kids know the terror attacks happened and that lots of lives were lost.  I told her about the heroes in the plane that crashed in the field that day; saving who-knows-how-many lives.  I told her how people stood in line across the country to give blood to help survivors.  I told her about the first-responders from several states away who went to help.

I am not trying to lessen anything about 9/11.  I remember listening to the radio.  I remember where I was, what I felt, and everything following.  Those memories will be cemented in me forever.  I cried for the families who lost their loved ones.  And I’ve cried for them since.  I’ve been to Ground Zero and cried there.

What rose from those ashes is what makes our country great.  I do believe the events of the day should be shared and remembered.  I believe a moment of silence is important . . One moment of silence.  But I also believe that to leave the lesson as the act of terror and the death toll only makes the lesson incomplete, devastating, and bleak.  This country came together like nothing I have ever seen after that day.  There were many heroes among the anguish that day.  And many heroes in the days and weeks following.

However you choose to remember 9/11 tomorrow, I hope we never forget that amidst the horrible events of that day; there were helpers, there were heroes, and there were every day people of this country who cared about each other more than themselves. 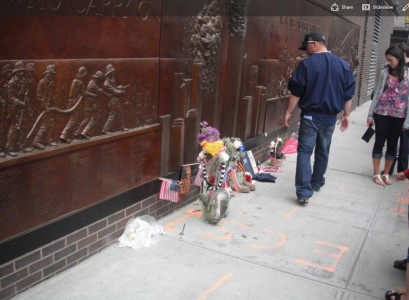