The picture below was my view yesterday, late afternoon, as I slid backwards down a steep, curing driveway surrounded by trees and swamps.  I do believe my minivan would have had no problems on the hill.  I was driving the hubster’s car.

I don’t scare easy.  On a regular basis I go solo in to basements of strange houses with no electricity.  I go in to boarded up houses.  I’ve gone in to houses that are supposed to be vacant, but have animals or squatters in them.  I’ve got pretty good nerves and lots of prayers.

I called a tow truck.  Everything the nice man tried was not working.  I was getting ready to just let the car fall down the hill.  I mean, it is fully insured.  Finally, an idea worked.

Tonight I am thankful that the car and myself are both ok.  It was just shy of three hours from getting stuck on the hill to getting back off the hill.  I plan to never do that again.  Today I was glad to be driving only my van again. 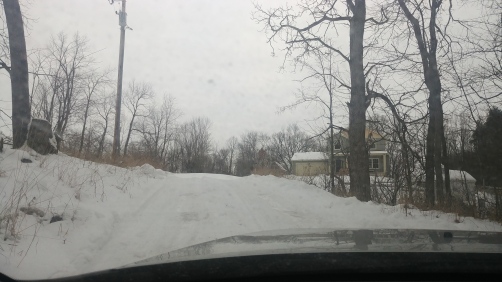